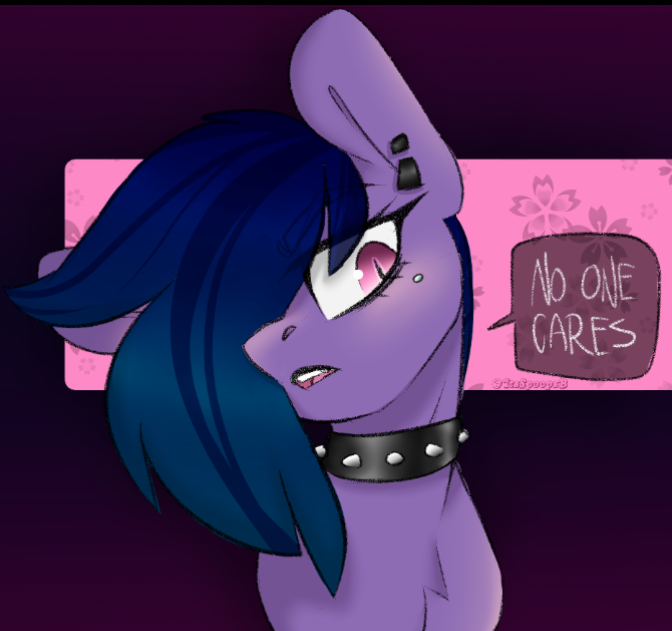 Loves a German
@Cerebrate
(Can i see a picture of him?)

with that she began sprinting, gaining tremendous speed, using her weight to drive the momentum
Posted 1 years ago Report
Link Quote Reply

Loves a Demon
(he is a thanator himself, bigger few more scars, and without the tentacles. instead a carapace shell has grown over his back remaining flexible but ver tough.)
Posted 1 years ago Report
Link Quote Reply

(Now, lets wait to see if anyones gonna join in.

Loves a Demon
(bout time i head off anyways, it’s half past two. goodnight everyone.)
Posted 1 years ago Report
Link Quote Reply 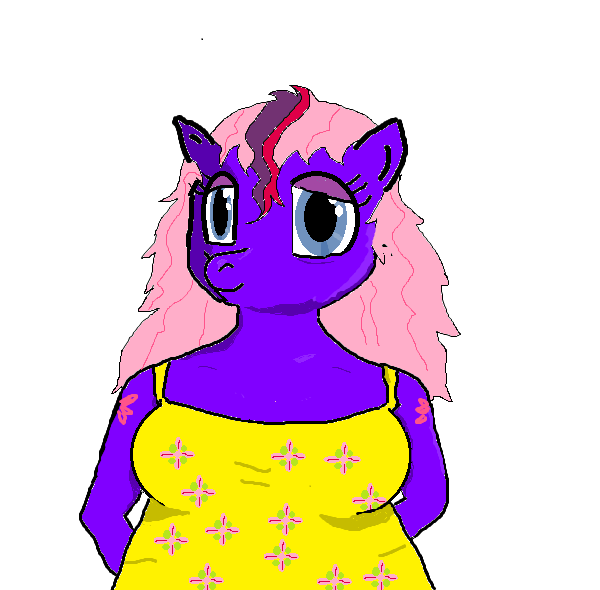 Vilina gotten up.
She slept off an important lunch feast.
The unicorn felt an ache in her chest-maybe her baby cried…
But she was allowed to see him only at night.

Vilina felt alone, and in need to express love.
She wanted to go quickly visit the Nobilian hospital and heal some brave soldiers and poor citizens.
But before the Duchess has reached tbe door have grabbed her.
“Mlady… your dress.. and undergarments…”

“But I need to hurry-I need~~”
~~“the protocol is first to all.” The servant doesn’t allow Vilinia to do do anything and squeze her into complicated set of undgarments witb many belts and straps.
And a whale boned corset.
“Is if neccary? I want to heal the soldiers, not to make them gawk at me!”
-“It’s part of the protocol.’
In the end she clad in crimson dress, with a slit and deep clevage, without shoulders.
Were her clothes even tighter?
She tried to lace the cleavage, but didn’t gotten far, as the servant stopped it.

If nothing crazy happens she will visit the hospital

Loves a Demon
@Okelkinam12
on the way she sees the results of noblian victories and defeats alike, namely the slaves, nonmagical citizens that had rejected bending the knee to the nobles, captured after the defeat of opposing armies and refused the dignity normally offered to soldiers, the main reason that when noblians lost there were no prisoners sent back, they knew there would be no exchange.

Teslatic prisoner: “when we stand victorious, you will be thrown from your high horses, your violations to the laws of nature will be your downfall again, you already destroyed your nation once that way.”

Noblian guard: “shut up! you may have gotten cocky over being treated above status, but it’s so simple, magic rules, by divine right, and you can bend the knee or drop dead!”
Posted 1 years ago Report
Link Quote Reply

“Guard?’ Vilina say sweetly.
’I can handle him. Please stay down.”
She turned to the prisoner. “Are you hurt?”
Posted 1 years ago Report
Link Quote Reply

“and even if i wasn’t you keep that magic of yours away from me.”
Posted 1 years ago Report
Link Quote Reply

She leaned in. “I am not going to hurt you.’ She coeed.
Posted 1 years ago Report
Link Quote Reply

Loves a Demon
@Okelkinam12
(with my apologies but, he IS a teslatic.)

his response is to knock his head forwards into her face.

(That fine)
She gasp in pain falling on her back.
Posted 1 years ago Report
Link Quote Reply

Loves a Demon
@Okelkinam12
this time the guard wasted no time, clobbering the teslatic down, or rather trying, because the other prisoners around still ahd fight in them too, soon chaos broke out, Vilina getting grabbed and dragged off.

when she got her bearing she was in unfamiliar surroundings, namely surrounded by what looked to be prisoners.

“good evening mylady, with our apologies but we need to get out and you are how we do it.”
Posted 1 years ago Report
Link Quote Reply

Vilinia dress gotten slided down and ruffled up.
She is too much in the moment.

One side in her tell her to scream. To struggle. To pull her silver chain. Call the guards.

But the prisoners.. they were suffering. They needed her. She.. could help.
The unicorn take a deep breath. “Very well, gentelmen. What can I do for you?’
Posted 1 years ago Report
Link Quote Reply

I post Changeling stuff
Okie two things. I willove to join just dont know if I should be cat or make a new person. I have an idea for a new clan tribe thingy I can run past Cere of course first
Posted 1 years ago Report
Link Quote Reply

Loves a Demon
@Okelkinam12
(oh dear, i forgot to post the reply i made here.)

they exchange looks and nod to each other.

“the old empyrean railroads are still running, and we’re getting one of those trains, with you as our insurance that none of the amges try anything funny.”

Loves a Demon
(on suggestion of Nyanta, this new faction is now available for character creation.)

The Catfolk (did we honestly expect anything else…) a prideful species of anthropomorphic cats and panthers.
All of them have a deep root for nature and life, so naturally they on most things side with Floranim forces in the field. however that does not mean they reject technology.
Their plans in this war are to simply survive. They were untouched before the war and remain the same. They live in the jungles and the mountains and most are skilled hunters, fighters and forgers.

(little addendum by me to follow.)
Forest Catfolk: when neutrality is no longer possible, the plantfolk can count on these as their warm blooded allies.

Wandering Catfolk: Traveling the world in nomadic ways it is only natural that they follow the trade routes, and lend their skills to Uruk trade princes.

Independent Catfolk: those who do not align with any of the greater powers and will carve out their own piece of the continent.
Posted 1 years ago Report
Link Quote Reply

I post Changeling stuff
The cat folk (did we honestly expect anything else…) a prideful species of anthropomorphic cats and panthers. All of them have a deep root for nature and life, so naturally they on most things side with Floranim.Two things to note of this relationship is that they will not bend their knee to them and they will not reject technology. Their plans in this war are to simply survive, expand their tribe and thrive. They were untouched before the war and remain the same. They live in the jungles and the mountains and most are skilled hunters, fighters and forgers.

Now onto the character shall we
Name: Nyanta Starhunt
Age: 20
Appearance:we have all seen him but in case you haven’t! The Boy
Race: Cat folk Panther hybrid
Personality: Charasmatic and curious about almost everything this young is about to pass his right of manhood and join his clan as a man and venture out into the world.
Faction: Starhunts/Florainm.
Notes:He is young and naive he is curious about most things espically about the outside world he has yet to see. growing up in the Jungle his whole life. He suffers from a sort of mental disability. He hears voices in his head, one he has aptly named Midnight. More importantly he is able to track the night sky.
Weapon of choice: Rapier and his claws


CLAN His clan is mainly allied to the plant life but will not just bend their knee to them out of no need. They are independent enough.
Posted 1 years ago Report
Edited 1 years ago
Link Quote Reply

Loves a Demon
@NyantaStarhunt
the Goldenoak forest was the oldest and generally the most respected forest of the continent, as it was home to megaflora beyond imagination and inspiration and setting for many a legend of magic, it was also the home to the plantfolk and many wild elves as well as catfolk. the great trees lifting enormous platforms that their homes are built upon, in places they ahd been reinforced with struts of metal, the homes of the starhunt clan lifting heavier platforms, to offer room for the cats living upon it, as the plantfolk were much lighter by default, the floranim generally understood that their neighbours were a part of life too, and an important one at that, but they continuously sent envoys asking the elders for their submission, as things were heating up outisde the beautiful jungles.

Druid: “i can only reiterate, Starhunt, your warriors would be an excellent aid to our magicians and rootweavers, us working together could even reawaken yggdrasil. our survival would be ensured.”

Midnight: “they’re still trying to pressgang your grandpa into war.”

I post Changeling stuff
@Cerebrate
the cat was hiding in the shadows and watching as the voice spoke out in his mind Yes sir. And i doubt they will get anywhere soon with papa Hunt.

(if you wanted me to be grandpapa) |
the elder cat speaks sternly like i have said a million times i will say a million more. You will have our Warriors and my clan when and only when the threat is at our doorstep. I will continue to send my healers and growers to help if you need it. But i will not be dragged into a war. Not yet

Loves a Demon
@NyantaStarhunt
“to wait until the sling closes around your neck while the mechanists industrialize our destruction is folly, but i suppose it is the way of animals to grow less wise with age… the danger will come, but by then it will be too strong to stop.”

Midnight: “a bit dramatic, but the leafhead has a point. maybe we should take a look what has them so agitated.”
Posted 1 years ago Report
Link Quote Reply

Hello my grandson i see you have once again invited yourself to a meeting.

Nyanta im sorry sir but the druid has a good point. Maybe we should take time to reconsider
Posted 1 years ago Report
Link Quote Reply

Loves a Demon
@NyantaStarhunt
the druid seems to be grateful.

“i realize, Elder Starhunt, that my words alone are not a lot, but perhaps your grandson’s eyes will be adequate proof of the danger. allow me to take him to the borders of the forest, and let him see the encroachment of the mechanist’s monstrosities.”
Posted 1 years ago Report
Link Quote Reply

I post Changeling stuff
@Cerebrate
I can do this sir.

Elder: after some thinking he nods and sighs fine but we won’t be bending any knees

the young cat meows happily and smiles thank you sir. he looks to the druid nyanta
Posted 1 years ago Report
Link Quote Reply

Loves a Demon
@NyantaStarhunt
“I am Alba, pleased to meet you.”
Posted 1 years ago Report
Link Quote Reply

I post Changeling stuff
@Cerebrate
he bows I’m sorry my grandfather just wants whats best for our clan. We are an independent as you know.